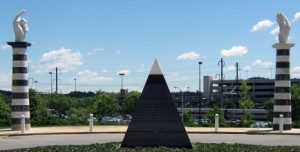 The art in front of the IRS Headquarters features a pyramid with a capstone between two pillars. The black and white stripes refer to the Hermetic concept of duality.

Symbols are everywhere and speak to those with “eyes to see”.

I have addressed the idea of the use of symbols in other posts and this recent article explores a new set of symbols of masonic origin that have sprung up recently in front of a new IRS building. Who would have thunk it?

All symbols are a form of “advertising” of an idea, principle, claim of ownership/ power/ authority and come in many forms and have existed as a major form of communication for millennia. Those who do not understand the symbols are considered as beneath those that do.

another article here: An Overview of the Power of Symbols

The IRS headquarters in New Carrollton, Maryland is a government building [IRS is not government entity but a private corporation] that, despite being constructed with public funds, contains art referring to elite secret societies. More importantly, the art conveys a strange message about the U.S. Constitution, and the American people in general. We’ll look at the symbolic meaning of the art found in front of the IRS headquarters in Maryland.

note the byline of the Vigilant Citizen is “Symbols Rule The World, Not Words or Laws“. Is it time to start paying attention?

Related Posts
David Icke: The Lion Sleeps No More
It's been years since I watched any David Icke material and was sent this video.…
BC’s High Court Fees UNCONSTITUTIONAL
In a potentially HUGE decision handed down after TWO years of deliberation (really?!) B.C. Justice…
Winning With Court Process – Eustace Mullins – The Rape of Justice
It doesn't matter what you are involved in, your attitude about being in it and…