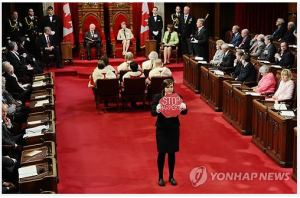 It was brief. It was quiet. You would be hard pressed to have a more Canadian protest.

Much concerned gnashing of teeth is being made of  a “security breech”.

Let’s see. A folded paper sign in the waistband of her skirt. Hmmmm. How dangerous….

Full body scanners and a hand down the pants, just like flying in the US may become the norm now. Gotta stop those dangerous anti-government paper signs.

Ideas of freedom, openness and integrity in government generate true fear in those who run the security forces.

In a world of loud, ugly, violent protest one young women stood alone in a sea of red carpet and government employees with a small home made sign with a clear simple message ” STOP HARPER”.

Some people are appalled at the “inappropriate” behaviour because it occurred during the throne speech. Are these the same people that act like spoiled jeering children in the house or think nothing bad of the Harper led government that was found to be in contempt of parliament leading to the dissolution of the government?

Can you say hypocrites? 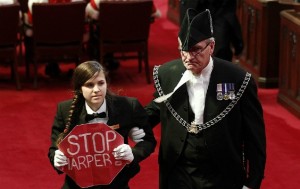 After it was over a press release from the young page was issued and CBC labelled her a “professional protester”.

Welcome to the land of sit down, shut up and lump it or leave politicking in the House, media and professional pundits.

Good for her for having more courage than most to very publicly make a stand and from a PR perspective very intelligently and respectfully.

Every country needs more like her to overcome and throw out the professional corruption that exists in most governments around the world including Canada. The corruption will continue until more citizens stand up and say STOP.

Petty minds will attack not her actions but her personally, when they might better be focused on being grateful that, at the moment, we still live in a country where she wasn’t hauled off to be beaten in some empty room.

And unless the House has been ruled a “non-free speech zone” it is fair game, unless the speech is that you disagree with I suppose.

Although, it wouldn’t surprise me now if she was labelled a terr orist for her actions by some, as ridiculous as that thought should be (but isn’t these days).

Ottawa – During the reading of Prime Minister Stephen Harper’s throne speech today, a young page was yanked from the Senate Chamber as she tried to hold up a stop sign placard reading “Stop Harper.”

“Harper’s agenda is disastrous for this country and for my generation,” Brigette Marcelle says. “We have to stop him from wasting billions on fighter jets, military bases, and corporate tax cuts while cutting social programs and destroying the climate. Most people in this country know what we need are green jobs, better medicare, and a healthy environment for future generations.”

Brigette Marcelle*, 21 and a recent graduate from University of Ottawa, has been a Page in the Senate for a year, but realized that working within parliament wouldn’t stop Harper’s agenda.

“Contrary to Harper’s rhetoric, Conservative values are not in fact Canadian values. How could they be when 3 out of 4 eligible voters didn’t even give their support to the Conservatives? But we will only be able to stop Harper’s agenda if people of all ages and from all walks of life engage in creative actions and civil disobediance,” she says.

“This country needs a Canadian version of an Arab Spring, a flowering of popular movements that demonstrate that real power to change things lies not with Harper but in the hands of the people, when we act together in our streets, neighbourhoods and workplaces.”

Related Posts
When Criminals Run The Show
The mafia took 20% of a business income to "protect" a business....from the mafia. Your…
US Banks, FED and Congress, Shame on You
In the world of the average guy wrong doing is shameful. Most people have a…
Smart Meters… watching you
Interesting article on the introduction of "smart meters" to homes. Home electrical meters that monitor…