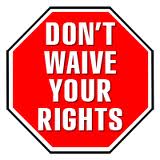 At all times you have a choice….

1. do I want to claim/exercise my rights?

2. Do I choose to waive my rights?

The first thing to consider is, to really have choice, you need to KNOW your rights and the EFFECT of using, or not using, your rights.

If you cannot answer the above questions with certainty you effectively have no rights, because in today’s world, every Tom, Dick, Harry, politician, bureaucrat, lawyer, police officer and public servant becomes your master. They are certain (even if they are wrong about the policy they want to enforce against you) so they will win.

Even a State or a Province has certain rights defined by law, and the representatives thereof, being ignorant of their duty and the rights they are responsible to protect, can waive State rights as well…to the detriment, often, of the people who’s trust they absconded with.

A US Supreme Court Judge states the truth and makes the case quite simply in this article about the individual States waiving State rights which they were entrusted to protect, therefore allowing the federal government more power, control, taxation and effectively become the master of the State.

Chief Justice John Roberts said Wednesday what has long been known but seldom spoken. During the third and final day of Supreme Court hearings on whether the Patient Protection and Affordable Care Act of 2010 is unconstitutional, Roberts said states have been compromising their sovereignty for decades through increased reliance on the federal government for money and accompanying directions on the governance of state affairs.

“It seems to me that they have compromised their status as independent sovereigns because
they are so dependent on what the federal government has done,” the chief justice said during Wednesday’s nearly three hours of hearings on the controversial health insurance law.

……Other lesser‐known provisions, said Art Thompson, CEO of the John Birch Society, include home visitations by government agents, the possibility of forced immunizations and “Community Transformation Grants.” The law in total, Thomson said, “will intrude on every aspect of life in America, from cradle to grave.”

There is a  principle in law in play here that applies to you and me. People are sovereign, with unlimited capacity, including the right to contract their rights away.

Your rights are superior to government’s because you, as “one of the people”, created the government and gave it limited powers to do certain things (in theory anyways). Statutes and constitutions are created to LIMIT the power of governments, not people.

However, if the government OFFERS you a BENEFIT in exchange for you WAIVING a RIGHT then you can CHOOSE to say YES or NO. The government has no power to convert a right you have into a privilege that they can control, license, tax or otherwise limit your right to exercise that right….UNLESS you agree to waive that right by accepting to contract it away with the government.

Every government application, permit and license is solely an invitation for you to waive a right so they can control, license, tax or otherwise limit you. Let’s redraft that quote a wee bit to personalize it:

Chief Justice John Roberts said Wednesday what has long been known but seldom spoken that you have been compromising your sovereignty for decades through increased reliance on the federal government for money and accompanying directions on the governance of your private affairs.

It seems to me that you have compromised your status as independent sovereigns because you are so dependent on what the federal government has done.

If you want privacy and property rights, which ARE YOURS ALREADY then stop contracting them away with the government.

In theory the requirements of EVERY contract include “proper notice” which means full disclosure of all the terms, conditions and effects of the contract being openly declared to you so you can make and informed, full consensual agreement.

You’ve never had proper notice on ANY contract with the government, I bet.

Become a Free Member and begin learning how.

What does the Dept. of Justice have to say… http://www.justice.gc.ca/eng/dept-min/pub/just/06.html

Related Posts
The Next Steps in Reclaiming our World and Ourselves A Special Communique from ITCCS
From: Kevin A <[email protected]> Date: 12 March, 2013 11:42:09 AM PDT Subject: How the Mighty have Fallen: The…
Dave Lindsay In Jail
I regret to report that Dave Lindsay is presently in jail and will be for…
Season of Treason III
A very good video with  comprehensive overview of the system that we live in. Recommended…