So, the time has come where the gloves come off. The U.S.A is now a military dictatorship under martial law for all intents and purposes.

Alleged President Obama signed into “law” on New Years Eve 2011/2012 a Bill that proclaims the “legal right” of government and their agents to arrest, detain, torture anyone… including US citizens.

Did you see this in the main stream news? I didn’t think so. Watch for the new Nazis coming to your town and “disappearing” political enemies (translation: these “political enemies” believe in freedom, limited government and the rule of law). The political enemies of the corrupt government were the first to go to the ovens well before anyone else in Hitler’s Germany.

While America was out partying last night, drinking it up and celebrating the end of 2011, Obama quietly signed the NDAA, the National Defense Authorization Act, whichnullifies the Bill of Rights and declares America to be a “battleground” in which all American citizens can be arrested, imprisoned, tortured and even killed with no due process.

You don’t even have to be charged with a crime. Now, thanks to Obama, the military can simply “disappear” you.

“President Obama’s action today is a blight on his legacy because he will forever be known as the president who signed indefinite detention without charge or trial into law,” said Anthony D. Romero, executive director of the American Civil Liberties Union (ACLU).

With this signing, Obama has cemented his position as the most traitorous U.S. President in history, not merely violating his promise to close Guantanamo Bay and end the military’s secret prisons, but actually expanding the power of those secret prisons over ALL Americans!

It is time to impeach this President and all those who voted for this freedom-crushing legislation. Read my urgent story today on the NDAA and the nullification of the Bill of Rights:
http://www.naturalnews.com/034537_NDAA_Bill_of_Rights_Obama.html

With your help, NaturalNews achievedsignificant health freedom victories in 2011. Here’s a compilation of what we were able to achieve in just one year thanks to the First Amendment (which is now under assault by SOPA, of course):
http://www.naturalnews.com/034531_achievements_2011_Health_Ranger.html

The two most important issues in America right now are the NDAA (just signed by Obama) and SOPA (Stop Online Piracy Act, a way for the government to take down any websites it does not like). The battle rages on over SOPA, and if SOPA passes, it will mean the end of NaturalNews and all “alternative” news websites.

Just so you know, we are all fighting for our basic liberties here. Obama has betrayed the nation, but he is also awakening the nation to the simple truth that Big Government is the enemy of freedom. If we do not correct these injustices, soon the internet will be “cleansed” of all “non-compliant” websites like NaturalNews, and your Republic will be lost forever.

Welcome to 2012, huh? What a way for Obama to usher it in: You are all now enemies of the state!

Check out for more:

If you think the the mainstream media will cover this honestly….pleeeeeeezzzzzzzz. This is how they cover the only hope for saving USA from self destruction, Ron Paul and his very successful grassroots presidential campaign where the only reason other candidates are talking about any real issues is because Paul has been for years. He’s the only one apparently interested in the rule of law and protection of private rights from big government (which explains why mainstream media slashed him or ignores him).

It is so obviously biased that any pretence of being “news reporters” instead of corrupted government shills is lost. This is just the latest example:

If you are not familiar with Ron Paul here is an important speech in Congress and his message here’s his latest appearance on Jay Leno: The Late Show:

Ron Paul excluded from a GOP Debate does interview discussing his position:

CNN Interview with Ron Paul Dec. 7, 2011 – Notice the underlying tone of the reporter’s statements and questions. 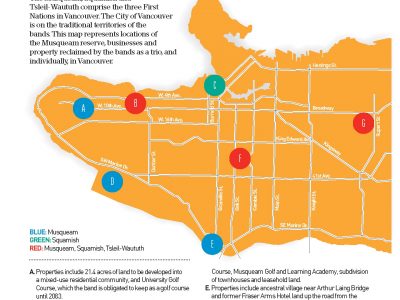 City Of Vancouver First Nations Land Jurisdiction Recognized
UPDATED BELOW First Nations or City of Vancouver. Who Has Authority? Is It Shared? City…
Season of Treason III
A very good video with  comprehensive overview of the system that we live in. Recommended… Supreme Court creates new public interest libel defence for press and bloggers
"The rulings mean journalists can make factual errors, but as long as they take a…