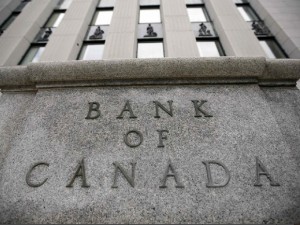 BUT what they have done is taken control of the board of directors for effective control of what the Bank of Canada (BoC) does and how it operates.

What you say? Well, the government tasked the BoC with the job of monitoring and supplying the money in the Canadian banking system to ensure a sound economy and to fund the financial needs of the country without having to borrow money at interest from international banks.

I give you a credit card at 0% interest that you use responsibly to pay your expenses and every month you use your income to pay off your credit card. Credit is created when you buy and collapsed/returned when you pay the card off.

Now I give you another credit card at 5% interest.

Would you continue to use the 0% interest card while paying off  your bill every month or would you INSTEAD use the 5% card and never pay off your bill but only making minimum monthly payments?

In like fashion the BoC has the constitutional duty to use the 0% card and instead uses the 5% card ringing up more and more interest payments that it never needed to incur. That is the national debt…how much is YOUR share?

If the BoC have failed in their duty to be responsible and create a large debt with huge interest what has that got do with me and you? Nothing. Look up odius debt sometime.

Thankfully, some brave souls have recently taken to task the BoC and launched a lawsuit to force the BoC to perform to it’s mandate. Will it succeed? Maybe, but probably only if enough Canadian citizens find out about it and get hopping mad, its the only thing that creates change.

Here’s a video of the press conference announcing the lawsuit, where the mainstream media was derelict in its duty again to report the real news that will free you instead of the fear and dramas meant to enslave and distract you….

Canadian constitutional lawyer, Rocco Galati, on behalf of Canadians
William Krehm, and Ann Emmett, and COMER (Committee for Monetary and
Economic Reform) on December 12th, 2011 filed an action in Federal Court,
to restore the use of the Bank of Canada to its original purpose, by
exercising its public statutory duty and responsibility. That purpose
includes making interest free loans to municipal/provincial/federal
governments for “human capital” expenditures (education, health, other
social services) and /or infrastructure expenditures.

The action also constitutionally challenges the government’s fallacious
accounting methods in its tabling of the budget by not calculating nor
revealing the true and total revenues of the nation before transferring
back “tax credits” to corporations and other taxpayers.

The Plaintiffs state that since 1974 there has been a gradual but sure
slide into the reality that the Bank of Canada and Canada’s monetary and
financial policy are dictated by private foreign banks and financial
interests contrary to the Bank of Canada Act.

The Plaintiffs state that the Bank of International Settlements (BIS), the
Financial Stability Forum (FSF) and the International Monetary Fund (IMF)
were all created with the cognizant intent of keeping poorer nations in
their place which has now expanded to all nations in that these financial
institutions largely succeed in over-riding governments and constitutional
orders in countries such as Canada over which they exert financial
control.

The Plaintiffs state that the meetings of the BIS and Financial Stability
Board (FSB) (successor of FSF), their minutes, their discussions and
deliberations are secret and not available nor accountable to Parliament,
the executive, nor the Canadian public notwithstanding that the Bank of
Canada policies directly emanate from these meetings. These organizations
are essentially private, foreign entities controlling Canada’s banking
system and socio-economic policies.

The Plaintiffs state that the defendants (officials) are unwittingly and
/or wittingly, in varying degrees, knowledge and intent engaged in a
conspiracy, along with the BIS, FSB, IMF to render impotent the Bank of
Canada Act as well as Canadian sovereignty over financial, monetary, and
socio-economic policy, and bypass the sovereign rule of Canada through its
Parliament by means of banking and financial systems.

Related Posts
First Nations’ Land “Title” OFFICIALLY Acknowledged
Two big events in First Nations' land title/rights recognition this week from the Supreme Court of…
Intro to private-person.com
The above video is a brief overview of some of the key concepts of our…
WikiLeaks: When Exposing the Truth is Criminalized
The WikiLeaks fallout is more evidence of what happens to "whistle blowers" in spite of…