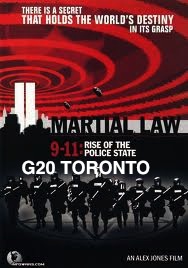 The infamous G20 summit in Toronto with over $1 billion dollar price tag has been exposed for more naughtiness on the behalf of government lawmakers.

It seems that some laws passed and enforced during the G20 have been proven to be:

Are you shocked? Surprised? Or just, yawn…what else is new?

Check out this video and the article reporting below:

Its nice to have verified, public acknowledgement that the “powers that be”

manipulate the law, law enforcement personnel, the media, concerned citizens and the public for their own ends. Most people are not surprised, but usually the proof and acknowledgement is lacking.

Here’s a story reporting the initial findings of the Ontario ombudsman investigating the complaint (bolding mine):

The deliberate misinformation surrounding a revamped Second World War regulation led people to wrongly believe police had the power to demand identification and detain anyone coming within five metres of the G20 security fence.

The law, in fact, applied only to people entering the zone.

Still, it should have been dubbed the five-kilometre rule given police were stopping and searching people far from the fences in the downtown core, ombudsman Andre Marin said in releasing the results of his probe into the controversial law.

The more than 1,000 arrests and illegal detention of hundreds, or even thousands, of others during the June summit was a “mass violation of civil rights,” said Marin.

“For the citizens of Toronto, the days up to and including the weekend of the G20 will live in infamy as a time period where martial law set in the city of Toronto, leading to the most massive compromise of civil liberties in Canadian history.”

Former prime minister Pierre Trudeau went to Parliament to hold a debate before enacting the War Measures Act in the early 1970s, but Ontario went out of its way to keep the new law on police powers quiet, said Marin.

“The government planned and premeditated not to communicate what authority it was relying on to execute searches and arbitrarily detain citizens, and that in my view is problematic,” he said.

It was a “likely illegal regulation” that was used to give police “extravagant” powers, Marin added. Police, he added, compounded matters with deliberate miscommunication about the reach of their new powers.

“Apart from insiders in the government of Ontario, only members of the Toronto Police Service knew that the rules of the game had changed, and they were the ones holding the ‘go directly to jail’ cards,” he wrote in his report, “Caught in the Act.”

“Many of those stopped and questioned by police under the Public Works Protection Act were involved in demonstrations, but many others were simply Torontonians going about the activities of their daily lives.”

The 1939 act, designed to protect public buildings during war, was used “to intimidate and arrest people who had done no harm.”

“It’s a civil rights land mine from World War Two,” Marin said of the act used to give police extra powers.

“There was a cascade effect of state mischief that resulted in hundreds of detentions.”

“Their advice was this applied to five metres outside the fence,” Pugash said Tuesday. “It was on the basis of that legal opinion that we trained our people.”

Premier Dalton McGuinty refused to comment Tuesday, saying he hadn’t read Marin’s report, but Community Safety Minister Jim Bradley admitted the government should have done a better job of communicating the changes to the law.

“It is clear to me that we should have communicated the regulation much more directly, clearly and promptly,” said Bradley.

Bradley refused to concede the Liberals had acted in secret and also declined to offer an apology for abusing people’s civil rights.

Marin laughed at the government’s admission that it could have done a better job communicating the changes in the law.

“Darn right you could have done better,” he said.

“There was a premeditated, conscious decision not to announce the existence of the regulation or the reviving of this wartime act, this relic. The government essentially poked a hibernating bear, woke it up, and they didn’t want the public to know.”

Marin said he was “bewildered” when Toronto Police Chief Bill Blair referred to a five-metre rule, which did not exist. Blair refused to co-operate with the ombudsman’s investigation and also declined to have his officers answer Marin’s questions.

Pugash said that on the day before the G20 was to begin, police got a new legal opinion stating that the rule applied to inside the fence.

“The first thing (Blair) did was make sure frontline people had that information,” he said, noting the only arrests made under the law came before the second legal opinion.

Pugash said that “in a perfect world” efforts would have been made to inform the public of the change in the rule, but officials felt it was more important to make sure frontline officers got the information.

“At that point on the Friday things were heating up, there was a lot of urgent activity for the police,” Pugash said.

The original regulation was passed after Canada declared war on Germany. Its use during the G20 “was of dubious legality and no utility,” Marin wrote.

“It was opportunistic and inappropriate to use a war measure that allows extravagant police authority to arrest and search people in the name of public works,” he wrote.

“Here, in 2010, is the province of Ontario conferring wartime powers on police officers in peacetime.”

The decision by the Liberal cabinet should not have been kept shrouded in secrecy, added Marin.

The ombudsman also blasted the Ministry of Community Safety for failing to ensure that police were adequately trained on the regulation, which he said contributed to the “chaos and confusion” on city streets during the summit.

“It may have been the best kept secret in Ontario’s legislative history,” said Marin. “By changing the rules of the game without real notice, (it) acted as a trap for the responsible.”

Marin launched a 90-day probe after getting 167 complaints about the law.

The New Democrats said Marin’s investigation was limited in scope and there should be a full public inquiry.

However, the Opposition said there was no need for an inquiry if McGuinty would answer all the questions about the law and fire former Community Safety Minister Rick Bartolucci.

“We actually had a premier of the province of Ontario and a minister of the Crown that brought forward an illegal and unconstitutional law,” said Progressive Conservative Leader Tim Hudak.

“They didn’t have the guts to put it out in public and say why they thought it was necessary and conspired to keep it buried away from the public for weeks.”

The question may be, now what? So what? Who will be held accountable? And, what will be done to prevent this sort of thing in the future? hmmm

Oh ya, there is the small admitted issue with overwhelming evidence of police brutality being investigated. Yawn? Or shock? 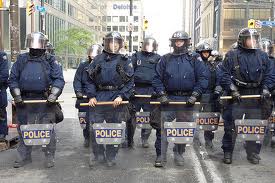 TVO’s Steve Paikin on Monday told a parliamentary committee how he watched a “chippy” journalist get punched and elbowed by police when the man objected to having his credential removed,

“If one defines police brutality as the thoroughly unnecessary, over-the-top implementation of violence to achieve something that otherwise could have been achieved without it then I saw that that night,” said Paikin, who is the anchor and senior editor of TVO’s The Agenda.

Earlier in the day the New Democrats said only a full public inquiry will get to the bottom of the overwhelming evidence of civil rights abuses at the G20 meeting in Toronto.

Paikin told the public safety committee probing the tactics surrounding the G8-G20 he was watching a “peaceful protest” on The Esplanade in downtown Toronto on the evening of June 26 when he witnessed the man reporting for England’s Guardian newspaper being pummeled by police.

“I did see the police assault a journalist,” he said, adding that police were rounding up anyone who looked like a journalist and in Paikin’s case he was given the choice of leaving or being thrown in jail.

Paikin said the man, later identified as freelance journalist Jesse Rosenfeld, did not have official G8-G20 credentials but did have Guardian credentials.

“They took his accreditation because they wanted to check out whether he was who he said he was. Two police officers held him, He was chippy, he didn’t swear but he was talking a lot. He was saying ‘Why are you holding me. There is no need to hold me. I am who I say I am’,” he said.

“One officer held one arm, The other officer held the other arm and a third officer came up to him and basically told him to shut up three times, punched him in the stomach. He doubled over. The same officer brought his elbow down on the small of his back and flattened him. It seemed to me that that was a massive overreaction to try and check to see whether somebody was who he said he was.”

Two University of British Columbia students Kirk Chavarie and Grayson Lepp told the committee of their treatment by police after attending a peaceful protest earlier in the day, including having to stand in urine and feces for hours on end in a temporary holding cell in Toronto’s east end only to have charges later withdrawn.

“Despite what some pundits would have you believe . . . I am neither a thug nor a hooligan,” said Lepp, who is to graduate from the UBC’s Okanagan campus.

NDP MP Don Davies (Vancouver Kingsway) told a news conference on Parliament Hill earlier that not to hold a public inquiry is to accept that Canada is becoming a police state where the toe of an officer’s boot or punch in the gut is the rule of law.

Davies said not only has it been proven that police falsified evidence to justify widespread arrests — the largest in Canadian history — they also manufactured evidence, including so-called weapons seized from completely separate incidents.

“What we need is a full public inquiry . . . if not, one of the most shameful and largest mass violations of Canadians’ rights by police and the state in Canadian history will go totally unredressed,” he said

Chavarie and Lepp, both active in the student union at UBC, told reporters they travelled to Toronto to participate in their first rally, calling for accessible post-secondary education.

After they participated in the peaceful rally they were billeted at the University of Toronto only to be awoken the next day by a police raid. They would spend more than 40 hours in jail with almost no food and water and no legal representation.

“We woke up the next morning at gunpoint,” Chavarie told reporters.

The two were among the many paraded in front of the media wearing handcuffs.

Lepp told reporters he found the entire experience “shocking,” especially hearing an officer berate a Francophone, also in custody, who had the “audacity” to ask for a glass of water.

“At which point the officer snapped. He said ‘shut the f— up you f—— French piece of s—. You are lucky there are cameras here or otherwise I would send you home to Montreal in a f—— body bag.’ Then another officer grabbed him and removed him from the situation,” he said.

What’s the world coming too? Excuse me…what’s the state of government power and abuse coming to?

Any ideas on knowing your rights, understanding the law or withdrawing from the conflict “they” seem hellbent on creating?

Related Posts
Police Sweep Their Offenders Under the Rug
Have you ever wondered how many police officers are disciplined for illegal acts "on the…
Defending your rights pays, sometimes ($1.3 million)
Here's a feel good story. CRA raids a home with a search warrant (and their…
Land Registry – Episode 2 by White Rabbit
Land Registry - Episode 2 by White Rabbit begin at 8:48 Published on May 5,…