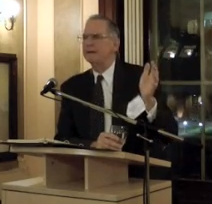 An interesting talk by a recently retired Supreme Court of Canada justice. He raises many points of interest most important among which I have heard and read many times before that:

It is up to the public to to shift the courts and politicians even more than it is the court’s job. He is not specific but the key issue before the courts in EVERY case is: would this conduct shock the conscience of the public? If the actions of the government, their agents or corporations is repugnant then the law is secondary BUT it requires a sufficient public outcry to be taken seriously.

This is the key to ending the continuing police, political and corporate corruption which ONLY is allowed to continue because there is not sufficient public outcry.

Once the public stands and speaks out in sufficient numbers ANY actions of the government and its agents will end.

Justice Binnie was appointed to the Supreme Court of Canada on January 8, 1998. He retired on October 20, 2011. On October 21, 2011, Justice Binnie spoke at the 3rd annual RightsWatch conference in Calgary, Alberta.

Some of his points from his talk (video link below):

18 minutes.. intersting comments on the [email protected]) police powers cases leading him to state at 19 min:
“at the end of the day public opinion is going to have much greater weight than a number of court decisions”

20:50 – “in many ways the success of your mission is in how many cases you lose because it shows you are continuing to push the envelope and making the court stand up and say well this has gone too far”

29:50 – “Canada lags behind every commonwealth nation is defining what police can and cannot do”

31:00 – quoting a law prof – “there are three fundamental requirement of civil liberties:

1. a legislature that is conscious of the need to protect civil liberties
2. an executive that has a sense of responsibility to enforce civil liberties
3. a vigilant public
interesting to note the courts he never mentioned as relevant….and the press is not as vigilant as it might be…there has to be a mobilization of public opinion that civil liberties have to be taken seriously…”
The bottom line is for there to be change… the people must speak out, not just because the judge said so but because it is the foundation of the common law legal system, the people ultimately make the law.
Have a listen:
Spread the info...

Related Posts
Pickton Inquiry Another Whitewash?
History is full of politicized, coverups and white washes of the rich and powerful, or…
Reality Check and What You Can Do – Catherine Austin Fitts + Karen Hudes
Great interview with a Catherine Austin Fitts who has real street credibility and insider knowledge.…
Read The “Law” Yourself
How to Read "The Law" Don't take ANYONE's word for what "the law is". If…