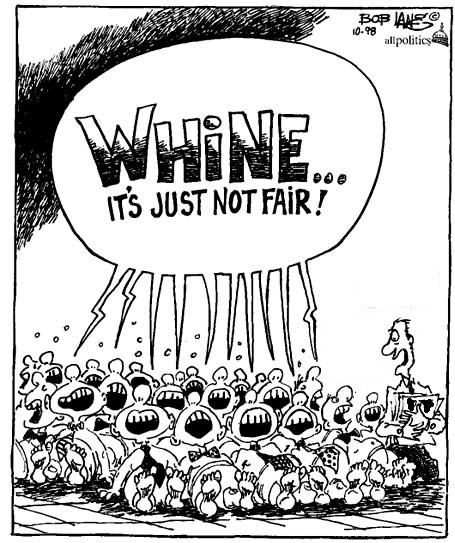 Yes, it’s true, fairness is a big issue for many people, and rightly so.

The question is, who gets to decide what is fair?

There is fair in “stuff” and fair in “rules”.

Stuff is relative, rules should not be.

I think that our emotional-social structure is a multi millennia old contest between the rich and powerful elite class indoctrinated with the idea that to lead, control, dominate and have power over others IS fair and the other 98% going “hey, I don’t think so but I don’t know how to stop you…so OK…I guess.”

It turns out that the idea of “fair” is a research point for some folks in white coats and they have demonstrated that babies as young as 15 months “get” the concept of “what’s fair”.

So if at 15 months we know fair from unfair what happened?

These smarties have even labelled the shock that these toddlers exhibit when they experience, or even witness, unfairness as “violation of expectancy”. It turns out babies are born to expect fairness as a natural event and are shocked when those expectations are violated. 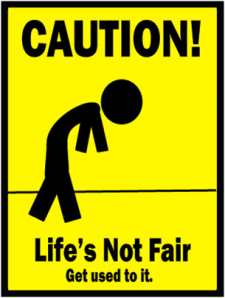 It seems many of us have never outgrown the “violation of expectancy” and are patently unwilling to “grow up” to the “that’s the tough/cold/cruel real world suck-it-up” attitude often promoted (thank goodness).

A loss of innocence translates into “some other people have learned to be unfair so accept and join the club”. In other words lower yourself done to their level to to make sure you “get your share”. Yuck.

The baby research gets even more interesting.

There apparently are 2 group of inherent fairness levels. One labelled “altruistic sharers” and the other “selfish sharers”. The bottom line is one will share the best of everything while the other will keep the best for themselves and share the rest.

The one failing of the report is that there is no mention of the group that refuses to share at all and appears to gain some sort of enjoyment at others suffering.

Either it is not an inborn trait, and must be learned, or these babies only included a sampling of “commoner stock” (royal and elite babies have better things to do no doubt (me thinks with tongue firmly in cheek)).

Wow. 15 months! So, that means when someone does a dirty to you and you say “that’s not fair” and they then say to you “oh, grow up” (by which they mean stop believing in, or expecting, fairness because people are not like that), you can tell them they are wrong, because it is proven that it is our natural state to be fair.

Science has now demonstrated people our born understanding “fairness” and must be trained out of it, if they allow it.

Eternal optimists unite and spread the word that we are born good at the core and we do not have to allow petty, evil, fear based propaganda to train us to expect unfairness and selfishness or worse yet participate in it our self.

We can drive the selfish controllers from their self procalimed perches of power by demanding fairness in all things, including what is fair punishment for their transgressions of what really is fair.

If the rules really were fair and the enforcement of the rules fair and everybody was properly educated in the rules….THEN there would be  a “fair” chance for each to get/have whatever “stuff” they wanted and not by demanding it from another because to take someone’s stuff by force is not fair.

If a 15 month old can decide that a 2nd child  who has nothing is to be given something voluntarily… what is our excuse?

Which brings us back to the original question “what is fair, and who gets to decide?”

Focus on ONE SET OF CLEAR, SIMPLE RULES, EQUAL EDUCATION of THOSE RULES and FAIR CONSISTENT ENFORCEMENT of the RULES.

That would be fair I think. What say you?

Even at 15 months, when they are just beginning to grasp language and acquaint themselves with their new found motor skills, babies understand the concepts of sharing and fairness, suggests a new study.

The researchers also found that infants do have different sharing “personalities,” with some being shocked by unfairness and others by equal sharing.

“These norms of fairness and altruism are more rapidly acquired than we thought,” study researcher Jessica Sommerville, of the University of Washington, said in a statement. “These results also show a connection between fairness and altruism in infants, such that babies who were more sensitive to the fair distribution of food were also more likely to share their preferred toy.”

Previous studies have revealed that 2-year-olds can help others — considered a measure of altruism — and at around age 6 or 7, they begin to display a sense of fairness. Previous research has also indicated that toddlers are able to understand altruism and react accordingly; they are more willing to help those who voluntarily share their toys.

To see when these sharing and fairness traits first begin to appear, the researchers showed 47 babies videos of an adult dividing crackers or milk between two other adults.

The researchers watched the babies’ reactions to the videos for what’s called a “violation of expectancy” — when babies are surprised by something, they tend to stare longer at it. On average, the babies watched the videos with the unequal sharing more intently, but some were more surprised than others.

The team also tested infants’ willingness to share by presenting them with two toys and asking them to choose one. A researcher then approached the infant and asked, “Can I have one?”A third of the infants passed the researcher the toy they had chosen and a third passed the second toy. The remaining third didn’t pass over any toy, which could mean they were unwilling to share, were nervous around a stranger, or didn’t understand the task.
Types of sharers

When the researchers compared the sharing results with the video-watching results, they found that the babies fell into one of three categories. The majority (92 percent) of babies who shared their preferred toy were also the ones who were shocked by unfairness in the videos and were named “altruistic sharers.” Of the infants who shared their least favorite toy, 86 percent were also shocked by equal sharing in the video, called “selfish sharers.”

“The altruistic sharers were really sensitive to the violation of fairness in the food task,” Sommerville said. Fairness seems as though it might even be built into our brains; research published in the journal Nature in 2010 showed that our brain centers react to unfair allocation of monetary rewards.

Though fairness may be ingrained in even the youngest of infants, our ideas of fairness seem to change as we age. Previous research found that young children seem to like all things to be equal, but older adolescents are more likely to consider merit when it comes to dividing up the wealth, a study published in the journal Science in 2010 found. It could be due to brain changes and adaptation to social experiences.

Even our evolutionary kin, the great apes, understand fairness. Research published in 2010 in the journal Current Biology indicates that bonobos always share, while chimps are stingy. The chimps actually show a similar progression as humans as they grow older: Young chimps are more willing to share, while older animals are greedy, some even using violence to keep their food out of the hands of others. 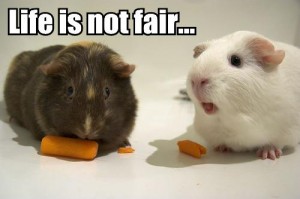 “Life” is fair but some people are not, there is a difference.

Related Posts
What The FUQ? The Jig is Up
I've had a number of conversations with people recently about "questioning what is going on…
NSA Really IS Watching You Online
This is an email newsletter from Sovereign Man I'm positing in it's entirety (bolding mine),…
CANADA Trademarks
Food For Thought? 3312