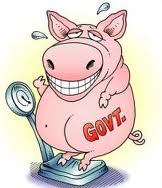 The Government operates without accountability, have you noticed?

At what point do you say NO MORE!

Government produces nothing into the economy.

Government gets every penny to operate from “taxpayers” and yet is not accountable for being responsible in how or where it spends that money.

All that money was taken under threat of punishment for not giving it over – which means it was taken by force.

Can you see a vicious cycle here? Especially when you consider the government employs about 30% of the workforce (confirm the % anyone?). 30% of Canadians produce nothing but bureaucratic processes and enforcement of all the rules, regulations, Acts etc.

The latest numbers are in and Ottawa and BC overspent by $41 billion of your dollars AGAIN. The report goes on to say that it happens so often its not a mistake and “too common to be accidental”.

There is a solution but it involves you!

In other words, when governments spend more than they say they will,

the public must notice. And care. And say so out loud.

We got rid of the HST.

How about getting rid of the GST now too.

Here’s the opinion article and a link to the report:

Ottawa and Victoria overspend by $41 billion Supreme Court creates new public interest libel defence for press and bloggers
"The rulings mean journalists can make factual errors, but as long as they take a…
Privacy Laws Back Door?
A recent revelation (but should not be a big surprise) that the Foreign Affairs and Department…
Wake Up Programming
The media is used to "sell" ideas, beliefs, politics and more. Audio and video combined…