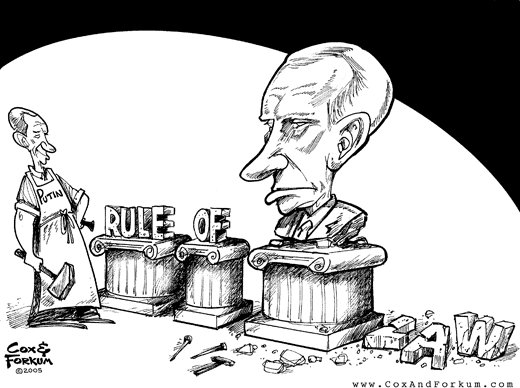 I wonder if that attitude is prevalent in the hearts and minds of government minions? What do you think?

Apparently in a speech causing some controversy last February to the law faculty at the University of Western Ontario, Kenney said Federal Court judges, who preside over immigration cases, weren’t doing enough to help the government remove immigrants with alleged criminal pasts, and other unwanted refugees, from Canada.

He accused judges of delaying such cases in the court, and of “heavy-handed” interference in decisions made by immigration department officials.

Rod Snow, the CBA’s president, “Your public criticism of judges who follow the law but not the government’s political agenda is an affront to our democracy and freedoms,” Snow said in a letter to Kenney. “Judges cannot enter the public arena to respond to criticism.”

“This goes beyond a general idea that we have good judges of integrity, it’s the confidence that brings litigants to choose the courts as a forum for resolving their disputes . . . and it is what allows them to accept the resulting judgments.

“Citizens have to have the confidence that whatever their problem, whoever’s on the other side . . . they will have a judge who will give them impartial justice and not be subject to pressures to direct their judgments in a particular way,” she said.

Related Posts
$10B Income – $15B Outgo = BROKE
This is the week for humour and the blindingly obvious, to normal intelligence people, but…
Read The “Law” Yourself
How to Read "The Law" Don't take ANYONE's word for what "the law is". If…
Focus on the Real Issues: The Foundation of their Case
I talk to a lot of people about court process on a variety of issues…