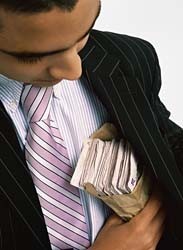 Money, Job Position It's All Wrong When in Exchange for Future Favours

I thought there was a law against giving political rewards, job positions for the expected benefit of future support?

You know the “If I give you this post/position when I need you to help me out, you will!” kinda deal.

Shockingly niave, I am I know, but this is the inderstood deal without it being admittedly out in the open, unless things are so corrupt and there is no threat of being called on it…..like in Canada’s Senate it seems.

Amazingly, in a letter made public the call for “we gave you the job you are EXPECTED to back us” is made. Forget the law or good conscience.

“In his letter, Brown reminds his colleagues that 38 of them were appointed by Harper after specifically promising to support the prime minister’s Senate reform agenda.

“Referring to those appointed earlier by Brian Mulroney, Brown says they’d be a “very small group struggling to do anything” if it weren’t for the additional Harper appointments that have given the Tories a solid majority in the Senate, with 55 senators to the Liberals’ 45.

“He concludes that all Tory senators owe their loyalty to Harper.

“Every senator in this caucus needs to decide where their loyalty should be and must be,” writes Brown, a longtime champion of Senate reform who was appointed after winning a senatorial election in Alberta.”

Forget the details of the reasons they want the backing and think about the message to the Senate and the people of Canada, do as you are told todo regardless of the outcome, consequences because you owe us. Hmmmmm.

One fellow has a partial grasp on this idea:

“Cowan said he suspects some of Harper’s appointees have discovered the Senate is more effective and useful than they’d initially thought. And he lauded those who are not simply falling in line with Harper’s Senate reform agenda.

“One of the roles of the Senate is to be independent. Maybe they’re seeing that,” he said.”

For more information on the concept of graft and corruption in politics check out this article:

Related Posts
The Government Should….
The stats are scary regarding the "government" as offering ANY CHANCE of honest, efficient, successful operations...give…
An Overview of the Power of Symbols
Below is a short video to introduce a few ideas about the power of symbols…
Privacy rights, taken away or given up?
Maybe the State doesn't take our rights away? Maybe as the article below claims "we…