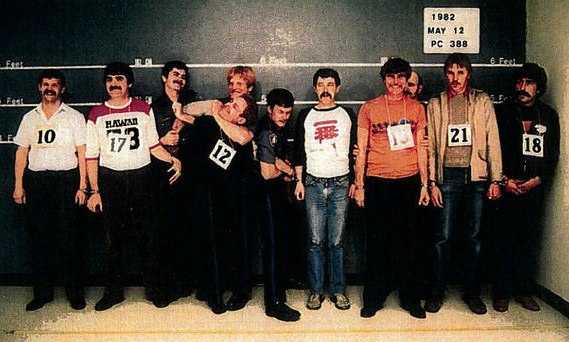 If you’ve read Part 1 and 2 of this “Systemized Fraud?” series you know I mentioned Canada as a probably having the same kind of problems with prosecutors acting…uh…illegally(?).

The photo above is a REAL photo of a “police lineup” that was instrumental in convicting an innocent man.

He’s #12, the one in a head lock, and if you look carefully both arms are being locked behind/beside him. All the other “suspects” are police in street clothes. Notice how the police look SO much less intimidating out of their uniforms? A reminder that uniforms help give the aura of power and authority when in fact….

It wasn’t just the police though. It was the prosecutors and judge, too, that sealed his fate behind bars for 26 years. He was innocent. Repeatedly he was denied appeals and even denied legal help to make his appeals. (article with a good history History- Justice for Ivan Henry-pdf)

Yes way. Here’s the hot-off-the-news-wire story, 27 years in the making. A guy defends himself against rape charges and loses, loses, loses for 26 years.

He’s out on bail and the DoJ “in the interests of justice” reopens his case, story above. That’s nice and all, but 27 years later? The conviction is overturned by the BC Court of Appeal, the same court that denied him appeals and legal aid.

Guess why they unanimously voted to overturn…wait for it….police fraud, corrupt prosecutors and judicial errors, omissions and outright really bad stuff. Check it out below:

“It’s shocking to see how many times he was asking to see the exhibits: `I want to see the witness statements that I never got.’ And nobody paid attention for the longest time.”

“It showed that similar offences were occurring and had continued to occur after his conviction, and the DNA identified another perpetrator.”

Many of the statements made by police and witnesses were from early in the investigation, some that described traits that would not have indicated Henry as a suspect. Over time, they changed to match Henry.

The court also saw photos from the police lineup that showed three officers holding Henry, one of them with a choke hold around his neck. Several of the other men in the line smile for the camera.

Sperm samples taken from some women weren’t disclosed and, while DNA evidence wasn’t available then, Layton said science could have eliminated Henry as a suspect with a blood test.

Layton said the evidence may have exonerated his client and given all the mistakes, the only solution was to acquit Henry now.

The Crown did not disagree.”

Well, I’ll be. How about that, withholding evidence from the defence (denying a basic legal right o answer the charge), framing him in a police line up, judge misleading the jury. Shocker.

I’m not surprised anymore, maybe you are.

I wish it weren’t so and these “system folks” may be the real criminals. They put him in jail by failing to do their job with honesty, integrity and a real interest in the truth. They lived free, happily for 28 years off their government incomes and now pensions.

There is more than one travesty of justice here and a denial of basic rights by people sworn to serve justice is, I think, a major crime. If we cannot have faith in our justice system working with integrity…..oh yes, this article series started with an article about the prosecutors and judges being immune from their mistakes or criminal acts, immunity given to them by….. their fellow lawyers. Right.

You can read the Court of Appeal’s acquittal decision here and be amazed at the total farce that was the police investigation, prosecution and judicial conviction.

This could never happen today right? That’s what people have said to themselves everyday… forever.

Here’s the one news article: Man acquitted after 27 years in prison- News pdf

Another news article that goes into more depth as to why the case was finally heard: innocent man jailed for 26 years pdf

And see various news articles online, until they disappear:

“The evidence as a whole was incapable of proving the element of identification on any of the 10 counts and the verdicts were unreasonable,”

How is this possible?

And the kicker? The real perpetrator:

“They arrested and charged a man who was convicted in 2005 and ordered imprisoned for five years for attacks on three women, though he was suspected of assaulting many, many more: Fifty-one women!

That was scarcely three years ago, yet this man has been freed and police have no idea where he is.”

“…the Court of Appeal in 1984 wouldn’t stoop to consider whether the proceedings were fair. It dismissed Henry’s appeal because he couldn’t afford to pay for transcripts and other documents.

Some 14 years later when it gave him another hearing, the court again stood on procedure.

Those who made that decision — Chief justice Lance Finch and colleagues Ian Donald and John Hall — remain on the bench.”

“No physical evidence was offered to link Henry to the crimes.”

Related Posts
Reality Check. Government Explained.
If you have a basic, conversation in the extreme common sense discussion mode, you may…
Stand Strong In Court
How to Stand Strong In Court and Reclaim Your Authority Discover how to claim your…
Public Servants Have Rules Too
It Has Become YOUR Job to Remind Them of the Rules if you are not…