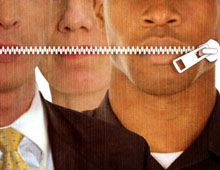 The travesty and shocking revelations about the RCMP, federal government and church’s long denied conspiracy known as “residential schools” are only one of the horrors of government gone evil coming out of the secret shadows of history.

The secret plan to harass, investigate and imprison Canadian citizens, and their children, who the government labelled “communists” in the 1950’s, is made public in this documentary.

Is there a time like this coming again if you speak out against government “policy”…which means keep in line?

Your “rights” only exist as long as men with power and guns agree to play the game that you have “rights”. Let’s hope the game plays on, otherwise there is no “rule of law” just ancient, barbaric “might is right”.

Enemies of the State: Synopsis
It seems hard to imagine today that a Canadian government would approve a plan to round up thousands of law-abiding Canadians and lock them away simply because they were perceived to be a threat to Canadian democracy.

Conceived in the early days of the Cold War, the top-secret plan called “Profunc” was to be enacted if Canadian national security was threatened. The fear was stoked by the outbreak of the Korean War, which looked as if it might become the precursor to WW3.

In Canada, the head of the RCMP drew up a plan to lock up “Prominent Functionaries,” including known communists and other people deemed to be subversives. The plan is breathtaking in its scale and detail. It listed those who were to be arrested, where they would be interned and how they were to be treated. Families of targeted people were not spared: many wives and children were to be locked away as well.

Incredibly, The Profunc blueprint remained in place until the 1980s. Only today are some people learning for the first time that they and their families were deemed Enemies of the State. The names of those people will astonish most Canadians.

“Enemies of the State’ also explores the targeting of possible ‘subversives’ today and asks what kinds of lists might exist that the Canadian public doesn’t know about.

You can’t say can’t happen because it has and if people don’t say NO, it may happen again.

You can watch the video here:

Related Posts
Privacy Making a Comeback in the EU?
The associated press released an article today that may indicate privacy rights are making a…
Natural Law
Many people ask me / tell me "forget common law...shouldn't we focus on natural law?"…
Speaking Out: Suppressing Dissent in the 21st Century
Sibel Edmonds Documentary - Kill The Messenger   http://www.brasschecktv.com/videos/the-911-files/sibel-edmonds-the-classified-woman-finally-tells-her-story.html http://www.classifiedwoman.com/ http://davidswanson.org/node/3665