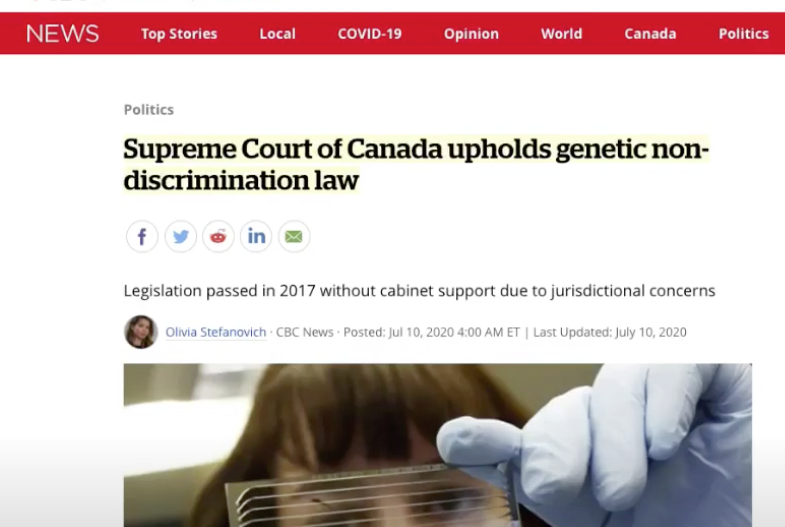 Is a PCR test ‘genetic testing’?

Requiring or forcing a person to be genetically tested, or “punishing” someone for not doing, so is a criminal offence in Canada.

The YouTube video on this page has had over 30,000 views in about 2 weeks and this Page, this article, over 21, 000 views. That’s a bit. Check out the follow-up article “Lawyers Agree Criminal Charges are Viable Action to Take…

What can you do? Taking action instead of depending on others to save you. Be an Action Taker to lawfully defend and assert your rights from government and corporate trespass upon your rights.

Is a PCR Test REALY Genetic Testing? Yes, it seems to be. It fits the legal definition.

If yes, then anyone, including an employer, who requires you to be PCR tested faces criminal sanction.

and Any employer who “punishes” you for refusing, or not disclosing PCR test results, faces criminal sanction.

NOTE: Any business that requires proof of vaccine MAY face criminal sanction, if the emergency use, untested, C-19 vaxxes are also considered to affect/effect DNA/RNA they may ALSO fall under the definition of genetic testing.

CORRECTION: article at the beginning of the video was published July 2020, not July 2021.

The recent Supreme Court of Canada (SCC) decision was more on point for other types of ‘genetic tests” BUT PCR testing is a form of genetic testing (meets the legal definition) and should fall under the recent SCC decision (as might the C-19 vaxxes).

NOTE: QUESTION: The vaccines being authorized for ’emergency use only’ and do reportedly affect/effect DNA and RNA most likely also falls under the genetic testing label, they are being ‘tested ‘ on the population (yet to be confirmed if they will fall under the legal definition of genetic testing).

on appeal from the court of appeal for quebec

Held (Wagner C.J. and Brown, Rowe and Kasirer JJ. dissenting): The appeal should be allowed

There is agreement with Karakatsanis J. that the most significant practical effect of the Act is that it gives individuals control over the decision of whether to undergo genetic testing and over access to the results of any genetic testing they choose to undergo. Sections 1 to 7 confer near complete control over the specific category of genetic information that Parliament was targeting (i.e. “genetic test” results). These sections give individuals the ability to dictate the manner and extent to which their genetic test results may be collected, disclosed, and used in a wide array of contexts. This control has cascading effects that ultimately result in the protection of health. By giving individuals control over the intimate health‑related information revealed by genetic testing, the pertinent provisions have the effect of reducing their fears that this information will be used against them in myriad ways.

The reasons of Abella, Karakatsanis and Martin JJ

[63]    In enacting the Genetic Non‑Discrimination Act , Parliament acted to combat genetic discrimination and the fear of genetic discrimination based on genetic test results. It sought to do so by filling the gap in Canada’s laws that made individuals vulnerable to genetic discrimination in the areas of contracting and the provision of goods and services. Parliament’s purpose is reflected clearly by the title and text of the Act. It is supported by the legislative debates and the concurrent amendments to the Canadian Human Rights Act  and Canada Labour Code  made by the Act.

[64]    Crucially, Parliament’s purpose in enacting the provisions in question is borne out in the provisions’ effects. The most direct and significant practical effect of the prohibitions is to give individuals control over the decision of whether to undergo genetic testing and over access to the results of genetic testing. This practical effect is a direct result of the prohibitions’ legal effects.

[65]    Act protect individuals’ control over their detailed personal information disclosed by genetic tests in the areas of contracting and the provision of goods and services in order to address fears that individuals’ genetic test results will be used against them and to prevent discrimination based on that information.

[83] Parliament has often used its criminal law power to protect these vital interests, acting to protect human dignity by safeguarding autonomy and privacy. The prohibitions on voyeurism in s. 162(1) of the Criminal Code, R.S.C. 1985, c. C‑46 , and on wilfully intercepting private communications in s. 184 , for example, both protect individuals’ well‑established interests in privacy and autonomy, while the prohibition on voyeurism also protects sexual integrity: Jarvis, at paras. 48 and 113. Safeguarding autonomy and privacy are established uses of the criminal law power.

[92] In pith and substance, ss. 1 to 7 of the Act are Parliament’s response to the risk of harm that the prohibited conduct and discrimination based on genetic test results pose to autonomy, privacy and equality. For the reasons set out above, Parliament has the power under s. 91(27) to protect people from emerging threats to privacy, autonomy and equality. This is especially so when Parliament reasonably views the information it is safeguarding as uniquely elemental to identity, and uniquely vulnerable to abuse. Protecting these core interests is an established, proper use of the criminal law power.

[103] Parliament took action in response to its concern that individuals’ vulnerability to genetic discrimination posed a threat of harm to several public interests traditionally protected by the criminal law. Parliament enacted legislation that, in pith and substance, protects individuals’ control over their detailed personal information disclosed by genetic tests in the areas of contracting and the provision of goods and services in order to address Canadian’s fears that their genetic test results will be used against them and to prevent discrimination based on that information. It did so to safeguard autonomy, privacy and equality, along with public health. The challenged provisions fall within Parliament’s criminal law power because they consist of prohibitions accompanied by penalties, backed by a criminal law purpose.

The reasons of Moldaver and Côté JJ.

[136] For these reasons, I conclude that the pith and substance of ss. 1 to 7 of the Act is to protect health by prohibiting conduct that undermines individuals’ control over the intimate information revealed by genetic testing. These provisions prohibit compulsory genetic testing, compulsory disclosure of genetic test results, and the non‑consensual collection, disclosure and use of those results in a wide array of contexts that govern how people interact with society. By giving people control over this information, ss. 1 to 7 of the Act mitigate their fears that it will be used against them. Such fears lead many to forego genetic testing, to the detriment of their own health, the health of their families, and the public healthcare system as a whole.

The taking of PCR tests (and the C-19 vaxxes) are voluntary, they BOTH require your consent, otherwise whomever forces a PCR test upon you is guilty of a criminal offence–but you MUST allege and claim such within 90 days (under the Act).

genetic test means a test that analyzes DNA, RNA or chromosomes for purposes such as the prediction of disease or vertical transmission risks, or monitoring, diagnosis or prognosis.

(a) providing goods or services to that individual;

(b) entering into or continuing a contract or agreement with that individual; or

(c) offering or continuing specific terms or conditions in a contract or agreement with that individual.

(2) It is prohibited for any person to refuse to engage in an activity described in any of paragraphs (1)(a) to (c) in respect of an individual on the grounds that the individual has refused to undergo a genetic test.

(2) It is prohibited for any person to refuse to engage in an activity described in any of paragraphs 3(1)(a) to (c) in respect of an individual on the grounds that the individual has refused to disclose the results of a genetic test.

5 It is prohibited for any person who is engaged in an activity described in any of paragraphs 3(1)(a) to (c) in respect of an individual to collect, use or disclose the results of a genetic test of the individual without the individual’s written consent.

FOR EMPLOYEES and EMPLOYERS (Beware!)

Canada Labour Code section 247.‍97 (applicable to employers and other subject the Act)

Quarantine Act, which authorizes taking of PCR tests on travellers, PROHIBITS ANY testing process that “involves the entry into the traveller’s body of any instrument or other foreign body.”

traveller means a person, including the operator of a conveyance, who arrives in Canada or is in the process of departing from Canada. (voyageur)

A commenter, 4hutchison, on his video made some good points:

The supreme court ruled that the substance of the provision is to protect individuals over their detailed personal information disclosed by genetic tests. There are most certainly violations of privacy in the way these genetic tests are carried out and so on: namely at

1) test locations are (ex. outside of doctor’s office; in parking lots; at airports; at work … )

2) and then subsequently in the way they are administered, interpreted and held confidential ( consent is not sought in many situations and scientific dialogue between trusted health care worker and the recipient is absent.

3) the sought after + results of the genetic test are taken up by gov’t health authority which allows a bureaucracy to makes determinations over your civil liberties if you test +; your private data is recklessly added to state’s pandemic narrative where you have no control. ”Use of polymerase chain reaction for diagnosis of inherited disorders ” <<The polymerase chain reaction (PCR) is a rapid method for generating a 10(6)- to 10(7)-fold increase in the number of copies of a discrete DNA or RNA sequence. The technique is being used for rapid prenatal diagnosis and carrier testing of several inherited disorders.(…)In other areas, PCR is being used to detect and characterize microbial pathogens and to characterize mutations associated with carcinogenesis.(..)>> https://pubmed.ncbi.nlm.nih.gov/2570652/

Here’s the video that started this inquiry leading to this Post (which took 6 hours to research, write/assemble/create, video, edit and upload)

Related Posts
RevCan/CRA Operates In Corrupt Concert With PPSC/DoJ: Disclosure
For those of you in battles with Canada Revenue Agency (previously Department of National Revenue,…

jd News and Update Webinar-May 1, 2019
This is a replay of a live webinar "jd News and Updates Webinar May 1,…
Court and the NAME Game
Once upon a time a baby was born, given a name, registered a NAME of…