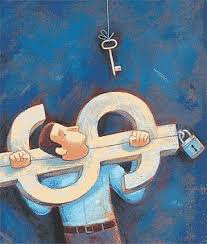 Ownership. It is all about property and property rights.

Who has possession and who has a claim.

At one time, “the law” allowed for the ownership of human beings. They were considered property, with no inherent rights. (What is “the law” but rich men deciding on what rules they will impose on everyone else for the rich man’s benefit and they enforce it with guns and jails.)

Ancient laws allowed for slavery of conquered peoples and class slavery, up until a few hundred years ago.

Timeline of abolition of slavery

“The law” created slavery as a legitimized act. A monarch, or government, had decreed for thousands of years that it was not only approved but the correct order of things that one many could own, control and even kill another man because the law considered the slave as mere property to be treated, used and disposed of as it’s owner saw fit.

Nations have seen “their” citizens as nothing more than property for the “nation” to do as it saw fit with them. Murdered in war, taxed in daily life and

Most governments today are ruled by the elite classes who carry on the age old belief in the masses are there to serve the classes.

We have left behind the private ownership of humans for the public ownership, which is foreign to common law, but quite alright under civil law.

Who says it is OK to own a human? Where do they get that right, that power, that authority?

The law that is twisted and hidden from you and I.

The law is nothing more than a set of arbitrary rules decided upon by the ruling classes and you can bet they make them suit their needs and rarely, if ever, do they worry about not obeying the laws that they themselves created.

The march of freedom from all forms of external law makers and elitist freeloaders has been a long and grinding one.

Freedom comes in fits and starts only to be challenged again and again by tyranny, greed, power and the people’s fear or acquiescence.

These past 2 months have been interesting to watch countries in the middle east throwing off the tyrants yoke of bondage after decades of rule. Countries where historically rulers ruled and citizens lived in miserable poverty.

America was founded from the beginning by the call for liberty and independence from foreign or local corrupt rule.

Sadly, America has wobbled down the path to socialism and hidden tyranny. Some would say it’s a fascist state now with the corrupted ruling class serving the corporate agenda. I think that the description is pretty close.

“Fascists seek to organize a nation according to corporatist perspectives, values, and systems, including the political system and the economy.

“Fascists believe that a nation is an organic community that requires strong leadership, singular collective identity, and the will and ability to commit violence and wage war in order to keep the nation strong.They claim that culture is created by the collective national society and its state, that cultural ideas are what give individuals identity, and thus they reject individualism.”

Canada has largely followed the US down the public policy, corporatism, socialist route (even leading the way at times).

The good news is that the path is reversible, if enough people stand up and say NO.

History clearly shows that most governments rule for the elites and corporate interests and not the peoples’ interests.

Recent history is now demonstrating that the people do have the power, always have had the power and shall continue to have the power when enough people stand with a common goal and voice to end the corruption in government and demand change.

We don’t need more laws. We need an educated, communicating public to drive the will of the government to prosecute corrupt government members, corrupt corporations decision makers, corrupt lawyers and corrupt accountants who twist and abuse the trust of the people in the interests of profit and power.

Every government knows they are outnumbered and that they require your consent to do whatever it is they “do to you”. Withdraw the consent en mass and the government must change tactics.

Many US politicians and news commentators express shock and horror that a government would open fire on its own citizens and yet the US has a clear recent history of doing just that on more than one occasion.

The government claims that you have consented to every demand they now place on you.

If you wonder where the government gets the right to run your life and tell you what you can and cannot do, you consented. Did you know?

Would you like to more about how you did that?

Does the “safety and security” claiming to be offered by the state make a good trade for your freedom, individuality and over 40-60% of every dollar you will earn in your life?

Here’s a video of US Congressman Ron Paul speaking about a 10% flat tax and the idea of “you consented” but Congressman Paul admits even he doesn’t know how he consented to the present state of affairs.

Related Posts
The War on Reality: The War for Your Mind
https://youtu.be/8ZbhCeUWa1A

Win Every Criminal Case?
For your consideration and testing...if you want to....Win Every Criminal Case From Now On! Listen to this clip by the late Rick Shramm from the On Point II seminar telling you how corrupt state court is and what you can do about it to WIN every time!
Defending your rights pays, sometimes ($1.3 million)
Here's a feel good story. CRA raids a home with a search warrant (and their…