Tsk Tsk Tsk. One could trust the government a wee bit more (maybe) if the Department of Justice lawyers (who are being directed by whom?) didn’t play dirty, dirty dirty. Yes, only some do. But NONE should make spurious arguments, drag their feet on disclosure and play to win instead of seek the truth.

note: More examples of this behavior by Crown on the way. If you have any cases where the Crown is slapped on the wrist for their behavior please pass it on to info (at) private-person.com

This is one example, more to come, where we highlight the Court of Appeal Ontario pointedly stating the Crown is on the verge of improper arguments and the lower court decisions less than well thought out.

Is it dirty play? Or just arrogant? Or incompetence? Or win at all costs by the Department of Justice and their lawyers.

Crown lawyers have a duty to “seek the truth, not win at all costs”. Unfortunately, too often it appears that politics or ego or ??? overrule the principles of law and justice.

Too many cases are lost at lower court levels and only won at the Supreme Court of Canada level that should never have been a serious question as to what the law was when a political outcome is in play. Or as this decision shows won at lower court decisions but the Crown appeals.

This case deals with 4 different cases all with the same legal question. The political outcome here would be to make it harder to sue the government when ‘done to” by said government.

Few people have the stomach or money for lose, lose at the lower level courts to then appeal and win at the  Court of Appeal or Supreme Court of Canada level. But it’s good business for the legal profession, to force that path, with great odds that most cases will never get there no matter how bad the original decision or legal process.

I’ve read/seen more than one lower court judge say/infer “you don’t like my decision, appeal it” as if it was easy and cheap to appeal to another court a poor decision from a lower court.

The concept of jurisdiction is dealt with directly and extensively. Four case all decided against the Crown…

Jurisdiction
[3] The term jurisdiction has many meanings. In determining jurisdiction, a court
may be deciding whether it has power to adjudicate over the person of the defendant or
the subject matter of the claim asserted by the plaintiff in its statement of claim. As well,
a court may be deciding whether the tribunal has territorial jurisdiction, whether the
amount claimed is within the tribunal’s monetary jurisdiction, or whether the person
sitting as the tribunal has jurisdiction to determine the plaintiff’s claim. In these appeals,
the concern is whether the Ontario Superior Court has jurisdiction over the subject matter
of each of the plaintiffs’ claims. Parties, by consent, waiver or any other manner, cannot
confer jurisdiction over a tribunal to try a case where none exists. On the other hand,
where jurisdiction to adjudicate a claim exists, as the authorities explain, it takes clear
legislative language to remove jurisdiction. For example, in Idziak v. Canada (Minister
of Justice), [1992] 3 S.C.R. 631 at p. 651, Cory J. stated: “The Federal Court Act does
not remove the historic and long standing jurisdiction of provincial superior courts to
hear an application for a writ of habeas corpus. To remove that jurisdiction from the
superior courts would require clear and direct statutory language”.

[4] Jurisdiction is the power of the court to render an enforceable judgment.
Therefore, for the purpose of these appeals, jurisdiction relates to whether the Ontario
Superior Court has the power to adjudicate the claim, or claims pleaded in the four
statements of claim. As there are not concepts such as partial, inchoate or contingent
jurisdiction, either the Superior Court has jurisdiction, or it does not. Nothing in the
Courts of Justice Act, R.S.O. 1990, c. C.43 or the Rules of Civil Procedure, R.R.O. 1990,
Reg. 194, in any way precludes the Superior Court from having jurisdiction to hear any
claim that is substantively adequate. This is because, as I will explain, the superior court
is a court of general jurisdiction having inherent jurisdiction to adjudicate claims
consisting of virtually any subject matter.

[5] Because all of the controversies arising within the territorial jurisdiction of the
province of Ontario are cognizable in the Superior Court, questions of the competence of
provincial superior courts to adjudicate a particular kind of case rarely arise. However,
there are two common exceptions that give rise to motions attacking the jurisdiction of
the superior court. The first is in respect to an arbitration clause contained in a contract
between the parties. The other arises from cases where there is a statutory code that
governs enabling the plaintiff to recover the remedy that he seeks in his claim in another
forum. Perhaps the leading example of the second exception is Weber v. Ontario Hydro,
[1995] 2 S.C.R. 929, which I will discuss subsequently.

Excerpts from decision summary as to who won (underline mine) :

[para 114] Macdonald J. was correct in holding that the Superior Court has jurisdiction over Fielding’s claim for damages for misfeasance in public office. […] On the Crown’s theory, again relying on Grenier, because Fielding has collaterally attacked the administrative decision, s. 18 of the FCA requires that it apply for judicial review. This is wrong. It makes no sense to attack an administrative decision made 13 years ago. […] Clearly, the Superior Court has jurisdiction over Fielding’s claim. This jurisdiction is not removed by s. 18 of the FCA. I would, therefore, dismiss the Crown’s appeal.

[para 115] The Segregation Review Board does not have the power to award damages. Therefore, McArthur’s only recourse is to the court. The Superior Court has jurisdiction over his claim. It is not removed by the Regulation or by s. 18 of the FCA.

It will be easier to sue the federal government as a result of an Ontario Court of Appeal ruling that rejected what it described as a Dickensian series of obstacles that the federal Crown was trying to uphold.

A lawsuit seeking financial damages against the federal government or one of its agencies may generally be launched in the Superior Court of any province, rather than in the Federal Court of Canada, the appeal court decided in a ruling issued on Christmas Eve.

The Court of Appeal decision followed a consolidated hearing earlier this year stemming from four unrelated lawsuits — three involving companies suing the federal government and one filed by one of the country’s most notorious bank robbers.

“This is a very significant ruling,” said Patrick Monahan, a lawyer for Telezone Inc., one of the companies in the case before the Court of Appeal.

The decision removes obstacles for “Canadians who try to hold the government to account,” added Mr. Monahan, who is also the Dean of Osgoode Hall law school in Toronto.

Lawyers representing the federal government argued that the lawsuits were attacks on decisions made by an administrative board or tribunal and they could not begin in a provincial Superior Court (in some provinces, this level of court is referred to as its provincial Supreme Court or Court of Queen’s Bench).

Instead, the government argued that a legal action must be initiated within 30 days in the Federal Court of Canada to try to overturn a decision.

If a group or individual were successful in the Federal Court, only then would it be permitted to initiate a lawsuit for damages in the Superior Court of a province, the federal Crown maintained.

It pointed to a Federal Court of Canada decision in 2005 that supported its legal position.

The Ontario Court of Appeal

Essential to decide jurisdiction motions early in the proceedings

said that case was incorrectly decided and it would lead to an unfair burden on anyone suing the federal government.

“The procedure that it advocates would take litigants back to the days of Bleak House, where they had to go from court to court until they were finally able to obtain their remedy,” wrote Justice Stephen Borins on behalf of a unanimous three-judge panel.

If the Crown arguments had been accepted it would be “extremely difficult and impractical to sue the federal government,” said Mr. Monahan.

A judicial review action in the Federal Court “deprives you of some of the normal rights in a civil case,” he explained.

Telezone launched a $250-million lawsuit against Industry Canada in 1999, alleging that it violated an implied contract when the company was not awarded a personal communication (cell phone) services licence four years earlier.

The federal government did not argue that the Superior Court did not have jurisdiction to hear the case, until just months before the civil trial was supposed to begin in January 2008 and more than eight years after the lawsuit was filed.

The Court of Appeal was critical of the federal government for waiting so long to raise the jurisdiction argument in all four cases.

“It is essential to decide jurisdiction motions early in the proceedings and expeditiously,” it noted.

The federal government can seek leave to appeal the ruling to the Supreme Court of Canada.

The high court typically agrees to hear only a small percentage of appeal applications.

The Ontario appeal court ruling means that the other three lawsuits can continue, including one filed by Micky McArthur.

The notorious criminal, who published a memoir called I’d Rather Be Wanted Than Had, is serving a life sentence for wounding four people during a 1994 bank robbery in Port Perry, Ont.

McArthur, who has more than 130 criminal convictions, is suing for the “intentional or negligent infliction of emotional and mental distress,” as a result of the more than four years he spent in solitary confinement, segregation and a special handling unit in prison.

Related Posts
Dave Lindsay Free At Last…
Good news, David Lindsay is now out of jail and here are his own words… 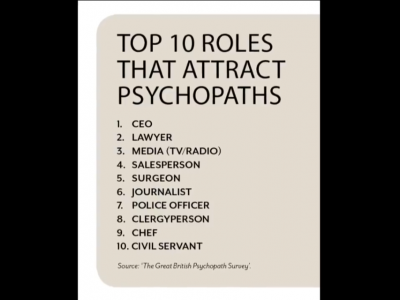 Top 10 Roles Psychopaths Are Attracted To
This research finding explains a lot. Makes so much sense. Who are the "system" people…
It’s a Start At Least: Police Accountability
These two news stories caught my eye for different reasons. We have had a spate…